We’re living on a planet one million three hundred thousand times smaller than the sun with a diameter roughly around 12,500 km. Our known distance from the sun right now is approximately 150 million km.

We orbit around this massive scorching star at a speed of 108 thousand km/hour.

The solar flames emitted by the sun are known to reach heights of around 800 thousand km. In other words, you’d have to place 60 earths on top of another and place them on the Sun’s surface to reach the height of a single solar flame!

The latest data tells us the heat of the sun’s surface is around 6000-Celsius degrees!

Think of this as an example:

The most heat resistant element on earth is cadmium, as far as we know. It turns into liquid at 6000 degrees. So, if earth and everything on it were made of cadmium everything would liquidize at 6000 degrees and then eventually evaporate and disappear.

“The earth and everything within it will evaporate like a single water drop when it is thrown into hell!”

Indeed, the sun is 1,300,000 times bigger than the earth and the heat in in its core is 15 million degrees. Right now, it is our source of life.

But where did the sun come from and where is it going?

According to modern theory the solar system was a cloud of gas without a particular form. There was no real sun or nuclear energy. This gas was comprised of hydrogen, that is two thirds of what makes up a water molecule.

In time this cloud of gas started to assume form and its heat started to increase. But there was still no sun. As the pressure of the gas increased the part most prone to the pressure started to form a core. This central point, which started to give out radiation, was the crux of the sun. 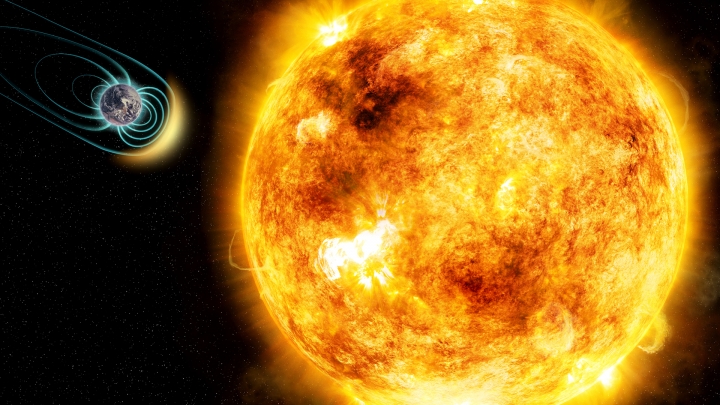 As the light of the sun increased the homogenous make-up of the gas started to change and the pressure started to localize at particular points. These points then started drawing various elements from their surroundings to eventually form the planets. As the proto planets continued to grow their geomagnetic forces grew stronger and they drew more material from their vicinity. Meanwhile the suns radiant energy was also increasing but the solar system had not yet been completely formed.

As the main proto planets continued growing and strengthening their geomagnetic forces, drawing more and more material from their surroundings they began to form tangible shapes. Meanwhile thermonuclear reactions started taking place in the sun. After this very long process of proto-planet formation the solar system took its current shape and the sun stationed in its current orbit.

Every star has its own fate, that is, a destined time of birth, growth, and death.

The massive star we call the sun will also change; it’ll burn its hydrogen fuel out and turn it into helium. Eventually its core will become so constricted that its surface will be forced to expand.

The Sun has already begun to turn into a red giant star. Its volume is continually increasing and this energy is already swallowing up the planets in its proximity.

As the heat in its core continues to rise the sun will eventually run out of its hydrogen fuel and begin to fuse helium. It’ll grow to such a massive extent, both in heat and in size, that it’ll engulf the earth with its heat and totally annihilate it.

At this point the sun will be a gigantic ball of fire 400 million times bigger than earth. This is beyond imagination!

Various reactions that take place within the Sun will cause the heat in its core to increase even further leading to the end of most planets in the solar system.

After all the nuclear energy is used up and the sun completely runs out of fuel it will suddenly begin to shrink and eventually become a dwarf star, though it will continue to shine for some time further.

Thus, is the predicted fate of the earth and the sun based on the latest science of the 80’s.