As known, the Basmalah, ‘In the Name of Allah…’ denotes that ‘Allah’ is a name.

A ‘name’ is a sign that points to the one who is ‘named’.

When I say ‘the One denoted by the name Allah’ I try to introduce a different perspective to the topic. This time, I want to take yet another perspective and focus on the original Arabic symbol of the word ‘Allah’. 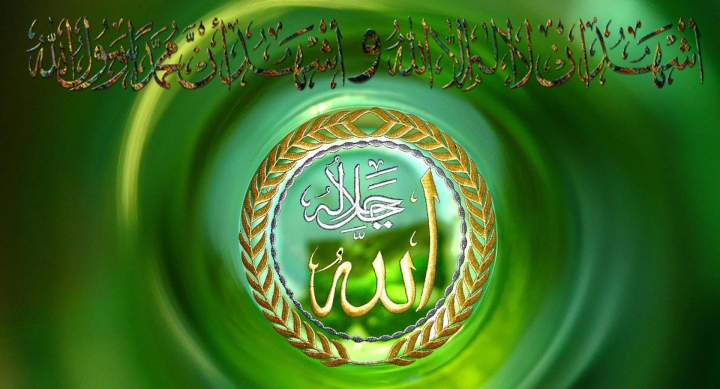 Anyone familiar with the Sufi way will know that existence comprises four worlds: the World of the Absolute Essence, the World of Attributes, the World of Names, and the World of Acts. The return to one’s essence and the acquisition of self-knowledge requires experiencing these worlds.

As known, the word ‘Allah’ is written in Arabic with the letter aleph (ا), which stands alone and independent from the other letters, followed by two lāms (ل) and a he (ه) in the shape of a circle (or a square in the case of Kufi calligraphy) attached to the second lām. There is also an invisible aleph between the second lām and he, which can’t be seen but is read to give the sound ‘a’.

Let’s have a look at the meanings these letters symbolize… Though, of course, this evaluation is based on the discovery of the enlightened ones (ahlul kashf) and are not binding, I want to share them anyway as it may aid in some of our assessments…

The first aleph signifies the Ahad quality of Allah and points to His Absolute Essence. The Absolute Essence is independent from all things and cannot be conditioned by any attributes, ideas or thoughts. It is such a state of ‘nothingness’ that none can ponder on or contemplate it; it cannot be understood or explained. Thus, the letter aleph, which is essentially an extension of a point, represents absolute independence.

The second lām is also connected to the first lām as its existence is derived from and is sustained by the qualities of the world of attributes. All the qualities of the names, present within the dimension of names, obtain their life from the world of attributes. Hence, the second lām seems like a repetition of the first lām (because it derives its existence from the first lām), but in terms of its implications, it denotes a completely different dimension of manifestations.

The letter he is connected to the second lām and drawn either as a circle or, in the case of Kufi calligraphy, a square. It signifies the constant manifestations of the world of names and attributes, the flow of qualities without beginning or end, the constant transformation of the world of acts, that is, the world of activities, or everything that transpires and is perceived within the multiple universes!

The shaddah or, ‘sign of emphasis’ on top of the he (which is used to double the consonant) designates the dichotomy between the manifest and the hidden aspects of the world of acts, in view of the perceiver.

There is also, between the letters he and the second lām, a hidden aleph, whose existence is acknowledged only when read. This symbolizes the dependence of the world of acts on the will and wish of the Absolute Essence, as it draws its life and existence from His knowledge, attributes and names.

The insightful and enlightened ones will recognize the truth in this construal more comprehensively and truly evaluate and appreciate the name ‘Allah’ in terms of what it actually symbolizes.

I hope this knowledge, authenticated via insight, will enable us to understand and appreciate the subtlety in the word ‘Allah’ and allow us to use it more appropriately in the future.