In this chapter I want to share my understanding of the reality of faith, Risalah, Nubuwwah and Wilayah…

As opposed to the seeming plurality or multiplicity of the multiverses based on our sensory perception, let us begin at the “point” - the Domain of the Names – or in other words, the means by which the Single, non-dual, indivisible, inseparable and infinite ocean of waves becomes manifest.

The “point” or the Domain of the Names manifests itself in yet another wondrously unique way at every instance. It is the means by which the single framed multi-dimensional picture, everything that is perceivable or unperceivable to us, is brought into existence. In the Quran this is referred to as disclosure (irsal).

Amongst the disclosed, some live their lives based on an external perspective or vision (on their creational path) and some, albeit only a very few, live to fulfill their function based on an internal reality.

What I mean by internal reality is the non-duality of existence to which I’ve been referring (since 1985) with the letter B or as the “point”. It is the real Self, which has been described in Sufism as “there is a Self within me that is not of me”…

While the person lives an external life based on his programming he cannot discover and express his internal qualities (some of the Names that are embedded deep within) for he accepts himself as the physical body and thus denies or is unaware of his energy body. 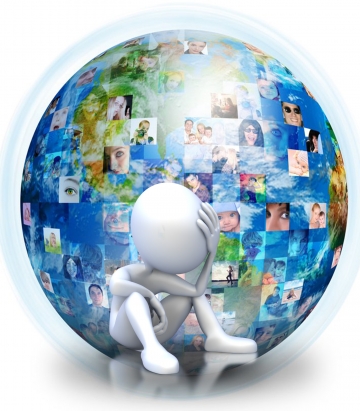 Whereas his real “Self” or essential reality, is nothing other than the Domain of the Names that are manifest in all of the beings! Thus he spends his life ignorant of the fact that these Names comprise his very existence and that these divine qualities can actually become manifest in his life. In fact, some do, but he spends his life totally oblivious to them, without ever once wondering about their source.

If the person’s life purpose is to experience the hidden infinity within his essence and to express these forces to create his heaven, the abode that no eye has seen, no ear has heard, and no speech has expressed, then he will need the Rasul of Allah (saw) to support (intervene) his purpose of existence. The Rasul of Allah (saw) articulates and notifies one of the truths based on the person’s purpose of disclosure. There is no compulsion in their application however!  “You cannot force them into anything”[1]For one who’s destined for it will succeed with ease, but no amount of force or compulsion can be of any avail for the one who isn’t destined for it. Thus the Rasul of Allah (saw) invites the people to have faith in the Domain of Names comprising their essence, or in other words, the Domain of Names pertaining to the One denoted by the name Allah. Therefore, to have real faith –not an imitative one- means to have faith that your Rabb is Allah. This is the way it was expressed in the past. Let us remember what Rabb means. Rabb is the force or mechanism that manifests and forms the person’s life in accordance with the data that is dictated by the Domain of Names comprising the person’s existence.

If the individual, who is like a single drop in an infinite limitless ocean of meanings, has faith that his essential reality is comprised of the Domain of Names, he will be freed from becoming conditioned by or dependent on anything external, and from feeling the need to possess and own external things. In turn he will be released of the fear of losing, for how can you lose something you don’t own?

No loss will cause any suffering or sense of burning. “They will have nothing to fear or grieve”[2]

He who doesn’t discern the reality denoted by the name Allah as explained by the Rasul of Allah (saw) will end up worshipping a god he creates in his imagination with whatever data he has in his database, or he will become an atheist.

And to discern the reality denoted by the name Allah as explained by the Rasul of Allah (saw) one must be aware of science and scientific discoveries. Without a scientific understanding one cannot discern this reality, but he can nevertheless “have faith in it”. This then is to have faith in the “risalah” function and in its teachings. This is why the word of testimony is about having faith in and witnessing risalah rather than nubuwwah.

The Quran accentuates those who will be admitted to heaven in respect of their faith not their deeds.

If one has faith in the mysteries revealed by the Rasul of Allah (saw) then for the outcome of this faith to manifest in his life he will automatically encounter the function of nubuwwah, which prescribes the necessary practices for the implementation and experience of this faith. So if one has faith in the realities that have been revealed through risalah then in order to experience this reality nubuwwah shows us the way, for example, it invites us to practice and perform salat. “Salat is the ascension of the believer” i.e. it is to feel and experience the reality in which one rests his faith.

So, woe to those who pray (out of custom), Who are heedless (cocooned) of (the experience of the meaning of) their salat (which is an ascension [miraj] to their innermost essential reality; their Rabb)[3].

“There are so many who seemingly perform salat, yet their only gain is fatigue”[4]

“The salat which has not been duly performed will be folded up like an old garment and thrown back at his face by the angels….”[5]

“O believers, do not approach salat when you are not aware of what you do (in a drunken state) until you are conscious of what you are saying…”[6]

All of the above warnings direct us to the same truth; that the reality in which one has faith must be experienced in salat. Thus the meanings of the words that are recited should be deeply contemplated upon.

Nubuwwah is the function that notifies one of the things he must do or abstain from in order to reach the reality that he has faith in.

The most profound knowledge in the history of mankind has become disclosed to Muhammad (saw) at the age of 39 through the mechanism of reading the reality of risalah. Hence he fulfilled his servitude as the Rasul of Allah, three years after which he exemplified his role as the Nabi of Allah based on the Sunnatullah.

The source of knowledge called the Quran that has been revealed (from his essence to his consciousness; it is not a book that fell from the sky) points to having faith in the reality of risalah and explains how this is to be done, explicating the necessary practices that need to be observed or abstained from.

There is no verse indicating risalah has come to an end however, which is also the underlying belief of the Mahdi-Rasul concept.

Wilayah is essentially the manifestation of the Name al-Wali from amongst the endless qualities comprising the Domain of Names, pertaining to Allah.

Wilayah is eternal, nubuwwah on the other hand is limited to the life of this world.

The rank of being a Rasul is the peak of wilayah.

Wilayah can be divided into two groups:

1. General wilayah: Formed through the purification attained by duly fulfilling the necessities of nubuwwah (as manifest on external scholars)

2. Special wilayah: Formed as a result of having faith in the realities revealed from the source of risalah and thereby attaining yakeen (the state of certainty; to be in complete submission as a result of an absolute comprehension) and qurbiyyah (the state of divine closeness).

If we think of humanity as a pyramid, those at the tip of the pyramid are the Rasuls. Their function, in every time and age, is to teach people of their essential reality.

The waves of reality that spread to the world via the Rasuls reach us all, and each of us evaluate and utilize them according to our brain capacity. While I for example approach it from a Sufi perspective, a scientist may evaluate the same truth from a scientific viewpoint and express it in scientific language, and so on… Eventually, it is always the same single truth being articulated; the reality of man and the ways to best experience it.

The majority of people have an imitative faith in the knowledge of risalah, without really understanding it. They then try to practice the requirements of nubuwwah with this inadequate and imitative faith. Hence the warning,"They say 'We have believed'... Say, 'You did not believe!' Say ‘We have submitted (become Muslims)’! For faith is not yet clarified and established in your consciousness!"[7]

This is why “mu’min” (believer; one who has faith) is a totally different dynamic to a “muslim” (one who has submitted).

Now reconsider the realities being swept under the carpet with the word “prophet”! Think about the extent of ignorance and denial hidden behind words like “Almighty God, beloved prophet, supreme saint…” etc.

To have faith in the teachings revealed through risalah is to be like Abu Bakr as-Siddiq and Hadhrat Ali (ra) the door of Knowledge. All such eminent beings have embarked their journey with an unshakeable faith in the realities revealed by the Rasul of Allah (saw) and experienced its direct result as manifesting the divine quality of wilayah in their lives.

Some reach this experience at a young age, some reach it in the last part of their lives, and some spend their lives with an imitative faith and an imitative practice of nubuwwah and change dimensions in this state.

Whatever the case, the truth of the mechanics of the system, the sunnatullah does not change: those who part this world as blind (to the reality) will forever remain blind!

Let us remember that the majority of the people of paradise are said to be naive!

May Allah enable us to be of those for whom having faith in the realities disclosed by the Rasul of Allah (saw) has been made easy.