In the previous chapter we said:

The manifestation of the attribute of Rahmaniyyah within the angle projecting from the POINT… Rahim, formed by the productivity of this projection, brings about all the various meanings derived from the dimension of Names. This is referred to as the ‘Arsh,’ which denotes universal prolificacy -though not in terms of the perceived material world- and ‘Kursi’, the actualization and dominance of Rububiyyah!

Since the part reflects the whole, every individual unit of existence contains the Rabb, i.e. the compositions of Names, which express themselves in degrees from the individual’s heaven (brain) to their body!

I want to now approach this topic from another angle:

Jinni sourced data constantly turn man’s attention towards the sky, the infinite space, the exterior realms, in order to prevent him from turning towards his essence. 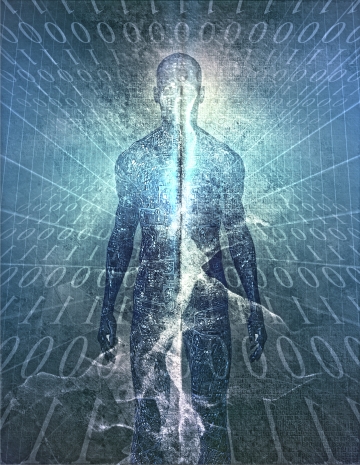 Those who are captivated by such whisperings and are influenced by their incitements prevent others from reading the prayers for protection made of verses from the Quran and supplications of the Rasul of Allah. Whereas repeating these prayers on a regular basis will shield and protect one from such influences. The invisible beings called the ‘jinn’ do not want humans to become conscious of the caliphate secret in their essence. Thus, preventing humans from reaching this reality is their primary mission. I have covered this topic extensively in Spirit, Man, Jinn and Intellect and Faith. The section ‘Why the satanic jinn are enemies of Man’ expounds specifically this topic. This is why the jinn are known for their satanic attributes.

They direct man’s attentions to the outer space to seek his Rabb, the Kursi, and the Arsh... As though these are material, tangible phenomenon!

If we want to recognize the structural qualities denoted by the Names of Allah and discern the system and order known as sunnatullah without succumbing to such detracting influences...

If we want to truly READ and understand the Quran to decipher the secrets it contains and recognize the immutable system and how it forms what... We must first become cognizant of the following:

If a verse in the Quran is talking about a human or another individual existence, we have to remember the ‘mirroring effect’ of the part and evaluate the word ‘Allah’ or the ‘Names of Allah’ in light of this. That is, as the desired manifestations emerging from the essence of the individual. In other words, as the various levels of unfolding pertaining to the individual’s essential reality.

If, on the other hand, the verse is talking about a universal concept, then we have to evaluate the same Names in respect of their levels of expression in the universal dimension!

If we want to discern the attributes of the One denoted by the name Allah we need to examine the chapter al-Ikhlas.

To comprehend the Absolute Essence (dhat) of Allah is inconceivable, it is impossible!

The attribute points to the dhat but it can never encompass it! As such, it is unreasonable to contemplate the dhat of Allah.

Muhammad’s (saw) best friend Abu Bakr’s (ra) testimony: “The comprehension that you will never comprehend Allah, is the comprehension of Allah” is the articulation of the completion of his ascension!

Indeed, if this reality can be correctly discerned and experienced, one will begin to observe, through insight, the dominion and administration of the Rabb upon His servants...

“We will show them Our signs in the afaq (horizons – outside) and in the anfus (inside, within their consciousness)…” (Quran 41:53)

“And on the earth (the body) are signs for the certain (who observe the qualities of the Names that comprise their being) and within your own selves (the essence of the self). Will you still not see (discern)?” (Quran 51:20-21)

Hence, in this observation, one will see that whatever is in the outer and the inner, absolute strength and power belongs only to the RABB, and that RABB is Mureed!

“Indeed, Allah does as He wills.” (He forms what He wills to manifest from His knowledge with Power; Knowledge – Will – Power) (Quran 22:14)

This verse points to Allah’s attribute of will called ‘Mureed’.

“The heart of the servant is between the two fingers of Allah.”

Every instance, he takes on a different color with the manifestation of his Rabb, the name composition!

“And your Rabb has decreed that you serve only Him (He created you to manifest the qualities of His Names)...” (Quran 17:23)

For, the Rabb is One, there are no other Rabbs.

External manifestations are a reflection of servitude to the internal qualities of the Names (Rabb).

Come, my friend, do not squander your life… Comprehend well the sunnatullah and make the best of the knowledge you have been given. Time wasted can never be compensated, come to your senses, do not misuse your time, do not dissipate your life with nonsense things disguised by Satan as alluring. Rather, prepare yourself with this knowledge for the eternal abode awaiting you after this world.

Cut your losses while you still can…