Traditional religious approach, which is founded on the concept of godhood, imagines there is a night called the Night of Power (Laylat al-Qadr)’… A night on which, they claim, the almighty God blesses His select servants with a great bounty! Whoever worships and glorifies Him most gets the reward, the great reward called ‘al-Qadr’…

Apparently, the angels that bring down (!) this bounty descend to the region where Muslims live on the sacred night of power, for if they see daylight they will degenerate like spoilt vitamin C exposed to sunlight!

Apparently that night of power is more blessed than a thousand nights, or 83 years of deifying, glorifying and worshipping!

If the angels find a sincere worshipper they ask their Lord “Oh Lord! Shall we give this person al-Qadr?” If God says yes, they bless the person with Qadir, otherwise they move on to the next house. This house-to-house search to give out al-Qadr goes on till dawn… The believers, in the meantime, go from mosque to mosque hoping to get lucky!

How many people receive al-Qadr that night? Nobody knows…

What good does it do to those who receive al-Qadr? Nobody knows…

As soon as it’s dawn and the sun begins to appear in the sky, the angels and the spirits immediately fly back to their homes near God!

According to Rasulullah-centered Islamic understanding, on the other hand, the construal of the Night of Power is as the following:

The Quran, which is a reference to the totality of secrets and man’s own essence (anzalnaHU), is revealed to man’s consciousness when he experiences his nothingness (night).

Remember man is the twin brother of the Quran…

Do you know what this reality, this secret (al-Qadr) is?

Experiencing the darkness of your nothingness (night) during al-Qadr, is more auspicious than all that you can live in a thousand months (an 80 odd year life span). 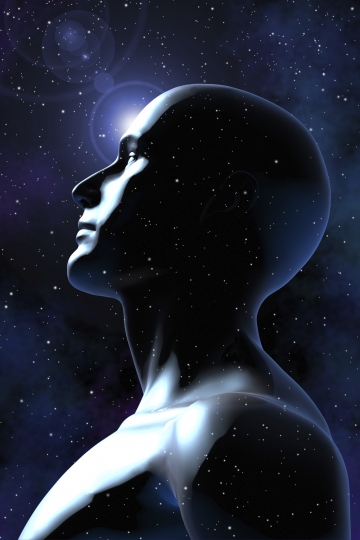 The angels (the angelic forces within – wings denote the 2-3-4 dimensions of these forces) and the Spirit (the meaning of ‘HU’ comprising the essence of your existence) becomes revealed in one’s consciousness with the permission (capacity) of his Rabb (the composition of Allah’s Names comprising his essence); such that he experiences his inexistence while experiencing the absolute existence of Allah, in a state of certainty (yakeen) free from all judgments!

This state continues until his mind awakens and he begins to feel he is a separate existence again; until his human thoughts and feelings begin to ‘dawn’ on him.

“Seek the Night of Qadr every night of the year” means this opportunity should be sought every night, or every moment in which you feel your inexistence in respect of the One referenced by Allah!

“Seek it in the month of Ramadan” means one should seek to attain this state with the aid of the true experience of fasting, which cleanses man from his human ways and enables him to discover his reality!

“Seek it in the last ten days of Ramadan” means, seek it towards the end of your spiritual cleansing, after a period of genuine fasting, as opposed to imitation.

To summarize what the metaphors pertaining to the chapter al-Qadr mean:

One instance, in the lifetime of man, in which the knowledge pertaining to his essential reality is revealed from his essence to his consciousness through a leap or an expansion in consciousness, is far more auspicious then the entirety of his lifetime! For this reality is the reality pertaining to HU! Based on the principle: “Man is the secret of the Quran, the Quran is the secret of man” this reality is realized from the depths of man!

When the person starts questioning who and what he is, when he believes in Muhammad (saw) the Rasul of Allah, and tries to understand his teachings and strives to cleanse himself from the concept of godhood by understanding Allah at least according to chapter al-Ikhlas…

When, in respect of the One whose name is Allah, he realizes the inexistence of his individual being, that is, when from the daylight of his existence, he falls into the darkness of his nothingness, and all forms lose their existence…

This instance of realization is called the state of ‘al-Qadr’.

In this instance he no longer remains as an individual existence, nor does anything else in the conceptual world.

In this state he witnesses the verse:

“…To whom belongs all sovereignty this Day? (this moment, now, in the sight of Allah time is only this present moment) To Allah, the Wahid, the Qahhar (The One whose absolute ruling applies beyond the concepts of time and space)!” (Quran 40:16)

He READS the “The Word of Testimony” (Ash hadu…) such that the observer is none other than the Self!

This state goes on until his mind-body self kicks in again and his human nature dawns on him.

He can now take his place among the people of reality as one who has experienced his own reality and begin to READ the secrets of the Quran as he awaits his death (change of dimension) as a servant living his life according to his creation purpose.

Why did I write this?

Because I believe the Book is not so much a ‘Book of God’s Commandments’ as it is a ‘Book of Secrets’ which, if not READ properly, can leave one in severe deprivation…

This short chapter about al-Qadr is only one example out of many… There are countless other mysterious knowledge in the Book of Allah, especially one regarding Ascension (miraj), that needs to be deciphered and decoded in this light!

It is unfortunate that the majority of us are unaware of this profound knowledge, many of us still think of the Quran as God’s book of commands and record of history.

I may be right, I may be wrong, but this is how I learned to read from the books written by the intimates of reality…

If I’m right, then those who do not evaluate this knowledge can think about their loss themselves…

If I’m wrong, then I am indeed in a lot of trouble by the almighty God sitting in the heavens sends His angels and spirit down to earth who once a year during some mysterious night of power!..