Let’s go back to the brain-spirit relationship…

The Spirit, or the Grand Spirit, is what forms the whole of existence. The meaning of every single form, no matter how we may refer to it, is contained within the Grand Spirit. When this meaning densifies as a particular composition we give it a name. In other words, that object comes to exist as the materialization of a particular meaning. As a result of this materialization it becomes the means to produce or materialize other meanings hence bring other things into existence.

For example, the brain, it produces various radiations.

The first radiation it produces is the one that forms the holographic radial body – the human spirit. Simultaneously, all meanings of all the brain activity are uploaded to this magnetic body.

Just as a radio station radiates electric waves and we receive these waves through our antennas and decode them to sound, the magnetic body both converts the meanings carried by the mind activity in the brain and carries that meaning.

Because it carries this meaning the personal spirit has an intellect. This is the intellect of the personality. When does this intellect mature? First, when it recognizes itself as a person and secondly when, if it engages in certain practices, it understands its own reality. 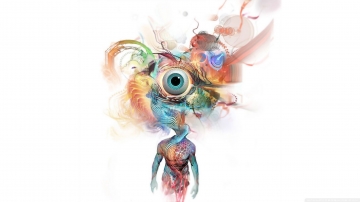 The second radiation the brain produces is of two types, namely negative and positive. These energies create two types of beings, those who are pleasant and amiable and those who aren’t.

Thirdly, the brain waves disseminate the person’s thoughts, ideas and comprehension on earth. Those whose receptors are aligned with these frequencies receive and convert these waves and experience sudden inspirations or epiphanies. For example, when someone claims, “I have an idea!” it may actually be the idea of a like-minded person whose brain waves they’ve picked up on.

The spirit strengthens itself with the brain, which preserves itself in the body via the electric signals that travels to every single cell in the body through the nervous system.

If and when the bioelectrical activity in the body stops the brain stops functioning and hence the electricity that travels to even the furthers cell in the body are cut off, and the electromagnet quality of the body to hold and preserve the spirit within itself is lost. That’s when the holographic radial body we call the spirit separates from the physical body. This is the event we call death.

The process of the bioelectrical energy sent by the brain being pulled back from the body is described in religious texts as “the spirit leaving the body by being pulled up from the toes.” In effect, when the electricity is cut off the person feels numbing in and around their head and the body begins to lose its magnetic pull. When this pull is lost the spirit automatically leaves the body. This takes place instantly.