What is hell and how is it described?

Here’s how Abdullah bin Masud (ra) narrates how hell will engulf and swallow the earth: “The Rasul of Allah (saw) said;

Everyone without exception is going to pass through the fire, or radiation, of hell that’s going to encircle and besiege the earth.

And there is none among you who He will not pass through (experience) Hell! This is, by your Rabb, a definite decree.

Then We will save those who protected themselves (who exhibit the forces that become manifest as a result of living ones’ reality) and leave the transgressors on their knees![1]

Indeed, Hell has become a place of passage (everyone will pass from it).[2]

It is then that Hell will be brought (to enclose the earth)![3]

So, what exactly is this hell that’s going to enclose the earth and through which everyone without exception is going to have to pass through doing now?

It’s eating itself up!

No, I’m not kidding! I’m relaying the truth. Here’s how the Rasul (saw) explained it in metaphoric language:

‘Hell complained to Allah saying, ‘O Rabb my parts have eaten each other up!’ Upon this Allah gave it permission to take two breaths. Thus, the extreme cold (winter) is from its ZAMHAREER and the extreme hot (summer) is from its SAMUM!’”

Indeed, such a truth could only have been explained in this way 14 hundred years ago!

Those who go to heaven will pass through hell then converse among each other regarding the fire of hell, “Allah conferred favor upon us and protected us from the suffering of the (Hellfire; the state of burning) samum (an infusing microwave radiation)!”[4]

Let us first understand the expression “Hell has eaten itself up.”

The sun is composed of a core made of hydrogen gas around 15 million degrees Celsius. Due to this heat there are constant nuclear reactions taking place and the hydrogen atoms are literally eating themselves up, i.e. burning out and turning into helium. The “left-overs” or the side products of this fusion are discarded whereby they reach earth. What are the leftovers of the sun, pardon me, of “hell”?

The Arabic word samum has two meanings. The first is, a beam of light that infuses into pores, and the second is poisonous or toxic fire, in other words, radiation!

How else could the thermonuclear reactions of the sun and the radiation produced by them be explained 1400 years ago?

The Rasul of Allah (saw) has disclosed religion, which is based totally on scientific truth, in the most perfect way. However, because people are accustomed to approaching religion in more conditioned ways rather than scientifically, their prejudice and predetermined beliefs deprive them from seeing this truth.

The destiny of earth and everything within it is quite conspicuously perceivable by those with a little insight and foresight. Yet this information wasn’t compiled and arranged holistically and comprehensively in the past due to insufficient science. Today on the other hand it is divine grace and mercy that we have access to these truths. Thus, we must make the best of every cell in our brain to evaluate and discern the realities that were pointed out 1400 years ago.

The earth and everything on it are going to be engulfed by hell, or in other words, the sun is going to expand and become hell.

As for humans, depending on the level of energy of their spirit or holographic wave body they are either going to be able to flee from earth to higher dimensions of life within the dimensional depths of the numerous stars in space, or become stuck in earth and the magnetic pull of the sun, thus becoming stuck inside the sun or hell forever.

I say forever because if you can’t flee from that magnetic field in the beginning then you can never escape it later as the density will only increase more and more with time.

This is why it is said both those who go to hell and heaven will remain therein forever.

Why wasn’t it openly claimed that the sun is hell and instead only implied with a few hadith?

It wasn’t accentuated because the people of that time were already deifying stones, objects, the moon and the sun! They were coming from a mentality that worshipped the sun and the moon. 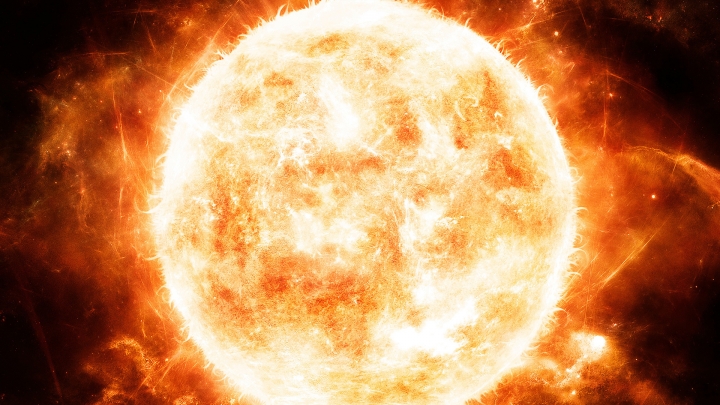 If the Rasul (saw) said the sun is hell they would have started worshipping the sun again, praying and glorifying the sun to bestow its favors and mercy upon them and not burn them! Even today there are still people who worship the sun, who carry its symbol on their flags and pray to its “son”!

We should also consider the fact that even though rare superior brains have enabled humanity to experience technological leaps -we have travelled to the moon and sent satellites as far as Pluto- we are still living primitive lives centuries in the past! Mankind is living solely in pursuit of pleasure, to eat, drink, mate, flee from what he fears and run towards what he desires, unconsciously conditioned by the society! This has been the case for centuries, unfortunately still continuing.

As the Rasul of Allah (saw) informed us, he will return from the abode he is still living in, he will live amongst us for some time, and he will correct the misunderstood information among the people.

Who gives us this good news? Muhammad Mustapha (saw)!

The sublime being who has been created with an extraordinary brain capacity and was made to observe with divine grace all the future phases of mankind and the world. He experienced a dimensional leap with ‘Ascension’ (miraj) and observed the lives pertaining to heaven and hell. He spent his entire life trying to inform the people of the precautions they need to take against what is waiting for them ahead.

All of the Nabis and Rasuls of the past have tried to give the same following message:

Do not squander your lives by deifying and worshipping false imaginary idols and gods turn to Allah who is the creator of the earth, the heavens, all of the worlds, and the entire universe. Don’t do wrong to anyone, try to be of beneficial service to humanity as much as you can. Get to know “Allah” so that you may be able to become aware of and evaluate the countless gems and jewels with which you, the vicegerent, have been embedded.

This theme has reached its climax with Jesus (pbuh) who claimed, “If you believe in the kingdom of heaven and want to be with me, leave everything behind and come with me!”

When Jesus spoke of the kingdom of heaven he was referring to the kingdom of the life after death. The Jews, who claim to be the superior chosen ones, and who prefer the kingdom of this world instead, did not accept him. He was put through countless torture after which he miraculously left this abode.

Muhammad (saw) gave us the glad tidings regarding his return!

Muhammad (saw), the noble being who offered humanity a most perfectly comprehensive book that leaves nothing out regarding this life and the life after death.

Muhammad (saw), who has explained all the details about the illusory nature of this world and the reality of the life after death...

This unmatched sublime being came to this world 1400 years ago with the mission of teaching the reality and had to address a bunch of nomads living in the middle of the desert! Imagine seeing and knowing everything regarding the future with all its details and possible dangers and having to explain this to people who are so far from having the insight and foresight to discern your message.

If you explain the truth openly they can’t fathom it and hence refuse and defame you. So, you are forced to explain it using symbols and metaphors, which you do with utmost perfection, yet they still deny and refuse you! They call you a lunatic. They call you a sorcerer. They claim you have been possessed by the jinn and talk on behalf of them!

You can clearly see the scorching fire towards which humanity is approaching and you know if they don’t take precaution they are going to suffer but you get mocked and ridiculed at the attempt of warning them.

Who can put up with such a situation?

Leave the people of that time aside, how about today? How about us? Have we been able to understand and duly appreciate him today at the brink of the 21st century? Despite all scientific discovery! Despite the clear warnings the Rasul of Allah (saw) gave 1400 years ago!

Humanity in my view stands at the door of the 21st century yet is still living in the Stone Age before the time of Muhammad (saw), unable to see the truth.

Why is religion necessary?

Why have certain rules and recommendations been made by the Rasul of Allah (saw)?

Is religion just about having beliefs?

Does it have scientific basis?

Why must humanity comply with religious regulations?

Let us now explore some of the scientific truths comprising the basis of the religion of Islam in attempt to answer the question “Why religion?”