The constellations referred to as “burj” in Sufi literature are comprised of stars similar to the Sun that have clustered together over a period of 500-600 million years. They permeate cosmic rays to the universe based on their make-up and structure.

The rays they spread constantly bombard the earth and its inhabitants along with all the other planets rotating around the Sun in our system.

The planets in the solar system, namely Pluto, Neptune, Uranus, Saturn, Jupiter, Mars, Earth, Venus and Mercury constantly receive, and like a reflector, transfer these effects to us, keeping the human brain constantly subject to cosmic rays.

There are three crucial times when the brain is especially prone to these cosmic effects:

3. The time of birth

When the embryo reaches the 120th day after conception the brain is just beginning to form and is ready to process the first cosmic rays. This first cosmic effect modifies the genetic make-up of the embryo to activate the formation of the spirit via holographic rays.

On the other hand, the bioelectricity that travels through the nervous system that holds all the cells together like an electromagnet, the holographic wave-body or the spirit, is also connected to the body and develops simultaneously.

Besides creating the spirit, if the strength and angular effects of the cosmic rays received by the brain, that is the aspects the planets make to each other, on the 120th day are sufficient and admissible, a specific circuitry necessary to produce anti-gravitational force will also be activated, and the brain will begin to upload this force to the spirit as well. This force will enable the person to escape the magnetic field of the earth during the period of doomsday, as I have explained in previous chapters.

If this circuitry isn’t activated on that specific day the brain will not be able to upload the anti-gravitational force necessary to resist the magnetic pull of the earth. This is what determines the state of the fortunate (said) and the unfortunate (shaqi) ones.

Additionally, the effects received on the 120th day determine the person’s lifespan. Similar to a timer, a switch is turned on that starts a count down for a specific period of time, say 45 years. If an accident doesn’t occur, at the end of that time, a hard aspect made by Pluto, the Moon and Mars to the point of death in that person’s natal chart will turn the switch off and the brain will immediately shut down. This is why we often hear things like, “he was perfectly healthy” regarding sudden deaths. Hence this third effect determines the life span and it is unalterable.

Finally, a fourth effect received on the 120th day determines one’s sustenance, which is the main circuit regarding one’s expansion capacity and the expansion one will live in the afterlife.

This truth was expressed by the Rasul of Allah (saw) 1400 years ago as:

“The constituents of one of you are collected for forty days in his mother's womb in the form of blood, after which it becomes a clot of blood in another period of forty days (80 days). Then in another 40 days it becomes a lump of flesh and (at the end of the 120 days) Allah sends His angel to it with instructions concerning four things, so the angel writes down his sustenance, his death, his deeds, and whether he will be of the fortunate (said) or the unfortunate (shaqi) ones. And then his spirit will be blown into him. By Him, besides Whom there is none worthy of worship, one amongst you acts like the people deserving Paradise until between him and Paradise there remains but the distance of a cubit, when suddenly the writing of destiny overcomes him and he begins to act like the denizens of Hell and thus enters Hell, and another one acts in the way of the denizens of Hell, until there remains between him and Hell a distance of a cubit, then the writing of destiny overcomes him and he begins to act like the people of Paradise and enters Paradise.” [Bukhari]

To sum up, the cosmic effects received on the 120th day in the womb determine the above-mentioned factors and commence the process of uploading data to the spirit. 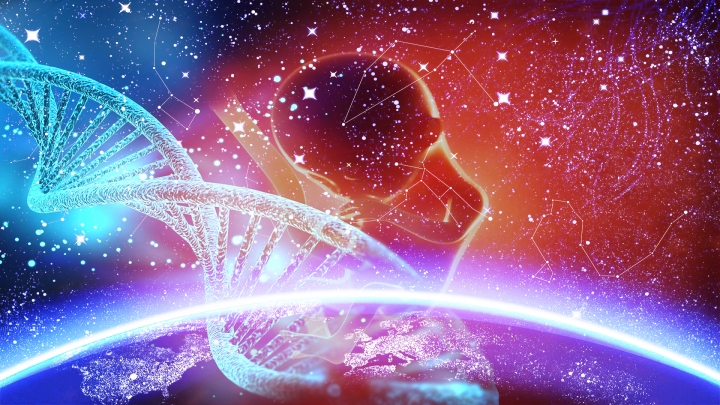 As for the brain…

There are 15 billion neurons in the brain according to latest scientific research. Each cell makes contact with 16,000 other neurons. A normal person uses only 5-7% of the brain capacity formed by these 15 billion cells. Scientists and philosophers who exercise their brains more use up to 10-12%.

The bioelectric energy within these neurons connect to other cells and the activity of the brain increases to the extent of the brains bioelectric power and the group of cells that are related to it.

The first cosmic effects received by the essence of the brain on the 120th day forms the persons “al-A’yan al-Thabitah” (the immutable archetypal realities) in religious terms. That is, their unalterable fixed archetypal program or constitution.

The brain that rapidly develops as of the 7th month begins to process the effects it receives from the constellations. The closer to the point of birth the stronger the impact these cosmic effects have on the brain. These effects determine the person’s intellectual capacity.

In the 9th month, especially the few days before birth the cosmic rays have even a stronger impact on shaping the person’s intellectual capacity.

The moment of birth

The most powerful rays received by the brain after the above process is at the point of birth. These effects determine the person’s ascendant or rising sign and when the baby leaves the mother’s protective magnetic field he becomes fully subject to these energies, which determine the person’s character, temperament, ability to form relationships and deal with situations etc.

You may wonder the role of genes at this point. Genes are only activated and hence the information they carry only have relevance if and when they find suitable outlets to express themselves in the person’s brain. If they haven’t received the specific coding from the constellations to make space for these expressions they remain preserved in an inactive mode until transferred to their offspring. And thus, it goes until they find the right conditions for expression.

I don’t want to bore my readers with too much detail so I will try to keep things short and simple as I try my best to explain the divine order and its mechanics.

After this point, just like a plaster that has dried in its mold, the brain will no longer change its form. Its primary capacity and function, i.e. the persons capability and style of thought, emotion, imagination, illusion, assumption etc. are determined at this point and will remain as such until the person dies.

Hence, we often hear things about how people’s temperaments or make-up won’t ever change as it their ingrained dispositions, or that astrologically, one’s natal chart reveals one’s unalterable fixed constitution.

Is this really so?

Is astrology really this valid and determinative?