Previously, I had talked about the footsteps of god (!) awaited by the masses. As the author of Spirit, Man, Jinn, the only book published in its genre in 1972, I would like to further expand on this topic in light of the changing circumstances…

If the 26,000 year cycle of change pertaining to earth, mentioned by Ibrahim Hakki Erzurumi in his Book of Gnosis (Marifatname) is to be completed in this century…

If the Mujaddid (Reviver) of the last century, who comes in the beginning of every Islamic Hijri century, is the final one… That is, if the Mujaddid who has come during the Hijri years 1401–1410 was the final Mujaddid and he is known as ‘al-Mahdi’ and if, according to record, he is only going to be recognized when he appears during a pilgrimage season (Hajj) in Mecca some time…

Then let us know that…

Just as the ‘knowledge of the Mahdi period’ is becoming apparent on earth before the Mahdi himself, similarly, the ‘application of the Antichrist (Dajjal) period’ is also apparent and active on earth today. Now it is time for the actual persons to appear.

Based on narrations of various hadith that state that “the jinn are going to be visible to all of mankind” the ‘Messiah Antichrist’ is going to emerge under an alien identity disguised as the savior, and claim to be the God (!) of all people! This is going to be followed by the emergence of Jesus Christ (as)?

Meteor showers, referenced as “Stones are going to rain down from the skies”, and narrations implying an increase in earthquakes and other natural disasters such as “three regions, one in the east, one in the west and one in the middle are going to be destroyed” are going to be prior to the emergence of the jinn, who are going to serve as the Antichrist’s army. How they are going to do this, only those who live to see it will know…

I want to explain something here:

The word ‘jinn’ literally means ‘an invisible being’, i.e. invisible to the human eye. Based on this general meaning, ‘any and all conscious beings that are invisible to the human eye’ are categorized as the jinn. Whether they live on earth, another planet within the solar system or elsewhere in space! Abdulkadir Al-Jili talks about the seven different species of jinn within seven dimensions, in his work, The Perfect Man. The Rasul of Allah (saw) had caught one from one of these types and had let it go. I am not going to go into the details of this now, as this is not our topic. Those who may wish to can research it.

In the same way that in the not so distant past, humanity was ignorant enough to claim that the earth is flat, the sun, moon and all the stars rotate around the earth… Today, the majority of flesh-bone bodied conscious beings called ‘humans’, who think of themselves as ‘intellectuals’, still deny the possibility of other intelligent beings in the universe… But just as claiming the earth is flat is defective, so is the assumption that humans are the only intelligent beings in the solar system, especially in the entire galaxy!

The fact that mankind can only visually perceive 4-7ten-thousandth of a centimeter of wavelengths and thus can only accept those within this range as ‘existence’ is an outdated and backward notion!

Let alone five, today science is asserting the possibility of our brain having 32 sensory inputs! Just as I said in 1972, science is now claiming our brains are not only evaluating wavelengths that are perceived through our eyes but also those that are much beyond these mediums. 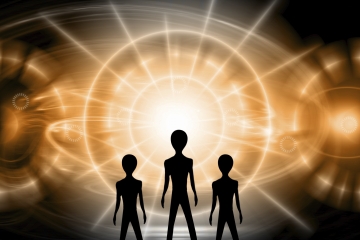 Indeed, just as conscious invisible beings dwell among us today, maybe a few years later a different species from another system will come to earth as the army of the ‘Messiah’ (!) and pervert humanity toward misguided goals.

The only defense mechanism man has against this Dajjal disguised as the Messiah and his army is PRAYER and the reality of LA ILAHA ILLALLAH!

One who understands the actual meaning of Muhammad’s (saw) declaration “LA ILAHA” will know with certainty that no being, oblivious of whatever seeming supernatural power they may exhibit, can ever be a God, and the concept of godhood is invalid, hence will refuse to submit to such figures.

But it has been revealed with certainty that there is no deity God! The concept of godhood is invalid and obsolete. The ‘Reality’ (Haqq) is equally present in every instance of manifestation! For a single individual to claim he is the Reality and ask others to prostrate to him is no more misleading than to claim white is black and black is white. In other words, it is an attribute of the Antichrist Dajjal, it is deceitful and fraudulent!

The path to Allah, for man and all creation, is an inward one, one that goes to one’s essence, to one’s own reality, not outside!

He who turns to an outward God that is ‘beyond’ is only turning to his own imagined conjecture!

The intimates of reality, the Sufis, all claim that existence constitutes dimensions within dimensions, the end point of which is the realization and experience of the individual’s nothingness in respect of the One within their essence! 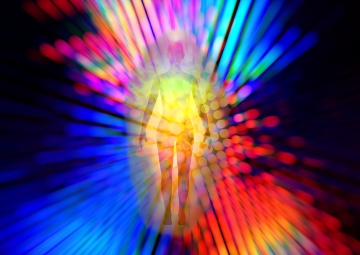 The biggest punishment for an individual, both in this world and in hell, is being veiled from Allah in His essence. In other words it is desolation!

Even the holographic universe model proposed by modern science, claims the ONEness and the non-existence of existence in respect of the creative power (Qudrah) within the system of strings or waves.[1]

Hence, based on all of the above, neither the jinn from earth or space who will become visible to the whole of humanity, nor the Antichrist Dajjal who will perform extraordinary acts with the help of the jinn, can be God.

Perhaps in the past such extraterrestrial beings introduced themselves as gods to the people on earth and were recorded in history through various narrations as ‘the visit or descent of the gods’… but none of this can mean a God or gods came to earth or created man!

Just as certain troublesome and erroneous tendencies, ambition and selfish leaps, satanic thoughts and feelings, can arise from man’s own make-up; it can also be derived from external waves that permeate through him.

As such, the most effective and fruitful practice man can do is to activate his prayer mechanism.

Prayer is the act of turning to the One denoted by the name Allah, to actualize one’s aspirations, through the strength and power of Allah!

There is a very subtle yet a crucially important point to take notice of here. I will share this secret in hope that perhaps some day after I am gone, some may remember this knowledge and send me a prayer…

In line with what I said in a previous chapter about why salat cannot be without al-Fatiha, when an individual seeks protection… They seek it not from an outside source, but from within their own essence!

In the transmission from their essence to their consciousness, various dimensions of existence, such as Ahadiyyah (Oneness), the station of Ama (Nothingness), Wahdaniyyah (Unity), Rahmaniyyah (the Quantum Potential), Arsh (Throne), Rububiyyah (compositional qualities denoted by the Names comprising one’s essence) and Ubudiyyah (i.e. the servitude of the ‘self’ or individual consciousness), are all present within the individual’s essence.

Thus, when one recites a prayer with the intention to seek protection, they are seeking refuge in the strength and power pertaining to the One denoted by the name Allah within their own essence. They are activating and manifesting these qualities, and as such, forming a field of magnetic waves emanating from their brain as a protective shield.

For example, when we read the Ayat al-Qursi, we are actually remembering that the rank or station denoted by ‘kursi’ (the Footstool) is in our own ‘sama’, that is, our own consciousness,[2] and rules over our own ‘ardh’ (body). Hence, we are invoking the strength and power pertaining to the existence of Allah!

So, when you read the various protective prayers advised in The Power of Prayer, such as al-Falaq and an-Nas in order to be protected from the jinn, or ill willed people casting negative energies, you are in fact invoking your own essence for protection! When you start reciting “Audhu biRabbil falaq…” or “Audhu biRabbin nas…” you are seeking refuge in the attribute of Rububiyyah within the Dimension of the Names that comprise your essence, and asking it to protect you, thereby emanating protective brainwaves to expel the negative waves surrounding you. Please try to understand this! For there is no more I can disclose in regards to this topic.[3]

If the prayers for protection are read with the awareness of this mechanism they will certainly be a lot more effective in our lives. Who knows the extent of knowledge that can be revealed if the Quran was read with such awareness!

This is why faith in the One denoted by the name ‘Allah’, that is, the One who brought into existence ‘the existence you presume you have’, can never be a God outside or beyond you!

The key to the infinite treasure within our essence is the knowledge and comprehension of Allah, as disclosed by Muhammad (saw).

May this comprehension and evaluation be eased and facilitated for us!

The path to a true savior lies in READing and understanding the knowledge imparted by Muhammad (saw)!

[1] Please refer to The Observing One for more information.

[2] The seven stations of the nafs (self)