Let’s consult our conscience and have a think…

Is the god in whom we have either believed or not believed, but in any case of whom we have been conditioned to think in a particular way, the same as the Allah that Muhammad (saw) disclosed?

Can the word or concept god even be applied to the Allah disclosed by Muhammad (saw)?

The place of god in the sight of Allah is the same as that of a servant! For, both are forms of meanings in Allah’s knowledge.

For this reason, everything in the sight of Allah is non-existent. The Eternal One (Baqi) is only wajhullah (face of Allah), i.e. that which pertains to Allah.

“...Everything (in respect of its ‘thing’ness) is inexistent, only the face of HU (only that which pertains to the Absolute Reality) exists!..” (Quran 28:88)

Every thing in terms of its thingness is inexistent. Only the aspect that pertains to HU exists!

“Baqi (eternal, without being subject to the concept of time) is the face (the absolute reality) of your Rabb (the meanings of the Names comprising your essence), the Dhul-Jalali Wal-Ikram.” (Quran 55:27)

Only the meanings of the Names pertaining to Dhul-Jalali Wal-Ikram[1] are eternal.

“So wherever you turn, there is the Face of Allah (you are face to face with the manifestation of Allah’s Names).” (Quran 2:115)

Wherever you look, you are face to face with the manifestations of the Names of Allah.

The word face (wajh in Arabic) can be used to denote more than one meaning. 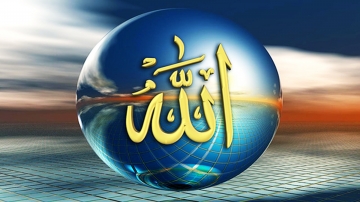 If one was to say ‘You will see the wajh of Muhammad’ clearly this is referring to Muhammad’s (saw) face. But when wajh is used in the Quran, it denotes another meaning. Though I had explained this in detail in other books, I would like to make a quick note here also.

The verse: “Everything will perish, save the face of HU”should not be taken as a day, in terms of earthly time, will come when everything will be destroyed… In the absolute doomsday, yes, this will come to pass. However, right now, we are concerned more about what it means to us in our present moment.

To perish is an act that is applicable to all times, including this very moment. According to the enlightened ones, this is observed constantly, evident by the verse “So wherever you turn, there is the face of Allah”.

The secret here is: Due to the lack of insight, many are not able to observe the face of Allah, who comprises the essence of every form of existence.

Indeed, wherever you turn with your insight and consciousness you can observe the face of the Divine, as He is Eternal and Omnipresent!

That is, Allah is eternally present yesterday, today, tomorrow and forever!

The biggest veil for the divine face is the label or name that is given to a particular thing. This label becomes a veil to the meaning of the face. The existence behind the veil and the meanings that constitute it obtains its existence from the meanings of Allah’s Names.

[1] The One who makes individuals experience their ‘nothingness’ by enabling them to comprehend the reality that they were created from ‘naught’ and then bestowing them ‘Eternity’ by allowing them to observe the manifestations of the Names comprising their essence.