The Quran was revealed so that it may be ‘understood’. In broad strokes, I would like to go over how the Quran, which is the greatest dhikr of all, should be understood.

The only way one can carry out certain activities is by becoming conditioned or by learning something by heart. This applies to all of creation. Only MAN has the ability to comprehend and contemplate and is thus honored as ‘Allah’s vicegerent on earth.’ Those who discern this truth and live by it are called ‘honored Muslims’. Surely, those who imitatively engage in certain activities will also take their share depending on their state of certainty (yakeen) of their essence.

To understand the Quran, one must be ‘clean’, that is ‘pure’, for “those who aren’t purified should not touch the Quran.” Unfortunately, this verse is often very misunderstood. We think by washing with water and taking ablution we are suddenly ‘purified’; however, the Quran describes the opposite of ‘purity’ that is ‘impurity’ with the following verse:

““Verily the dualists (who claim the existence of their ego-identities alongside the Absolute Oneness) are contaminated (filth)!”[1] 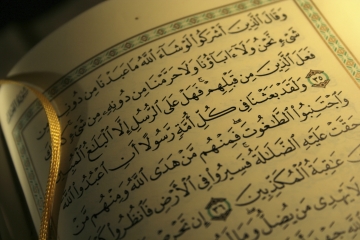 This verse instructs the dualists who have become impure with the filth of duality to not touch the Quran without becoming purified from this impure system of thought, for while in a state of duality, one cannot discern the Oneness of Allah in the Quran.

The Oneness of Allah and the idea of observing the ‘many’ from the ‘one’ as opposed to the perspective of a god up in the heavens, spawned from the illusion of thinking we have a separate existence, may not be easy to understand. This is why, if we really want to understand the Quran, we must first cleanse ourselves from the filth of duality.

But what is duality?

In simple terms, the conception of a ‘god’ or a ‘deity’ separate from existence is what underlies the dualistic outlook.

In other words, to think there is a god who is far and beyond you, who sees and hears you from a distance, who sometimes intervenes with your activities and sometimes leaves you to your own accord, who casts those who anger Him to Hell and sends those who can manage to please Him to Paradise, who is sometimes benevolent and sometimes enraged, is to be in a state of duality. Such thoughts and concepts of god/godhood constitute the very foundation of dualistic perception.

The Rasul of Allah (saw) has formulated the understanding to free one from the concept of duality as:

“There is no god, only Allah” (La ilaha illa Allah)

What this means in short is: There is no god or godhood. There is only Allah and His system.

“The most virtuous dhikr is ‘La ilaha illa Allah.’”[2]

“One who says ‘La ilaha illa Allah’ will go to Paradise, even if he steals or commits adultery.”[3]

Such hadith point to the importance of this formula. That is to say, even if one is to do all of this, if he comprehends the meaning of the Kalima-I Tawhid (La ilaha illa Allah), at some point he will repent and not make the mistakes that result from the illusion there is a deity-god. He will turn his face to Allah and live accordingly, and this will bring him to a state of Paradise.

Those who would like more detail on this topic can refer to Muhammad’s Allah.

So, how can one begin to experience Paradise? It is said, “They perceive the scent of Paradise while in the world.” What does this mean?

This is the experience that takes place when one begins to be cleansed from the illusion of an external deity-god and recognizes the limitless infinite concept of Allah.

This is, when one will realize that the limitless infinite Allah is present in every iota of existence with His perfection in accord with His Absolute essence (dhat). The One whom for years he thought was far and beyond has now shown His face from himself!

To look for Him everywhere only to find Him within… 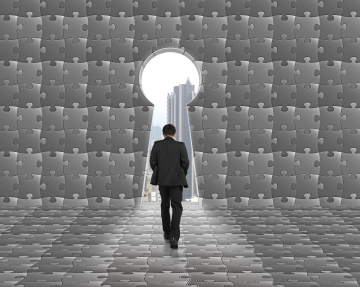 There we will grasp the hidden meaning behind the verse “…So, wherever you turn, there is the face of Allah (you are face to face with the manifestation of Allah’s Names)”[4] and begin to love Him everywhere and in everything. He will no longer feel anger or hold grudges towards anyone. He will not gossip or criticize anyone or force anyone into anything. Rather than wasting his time on temporary pleasures, he will engage in services of permanence and remember his beloved with his actions, words and consciousness. Practicing Islam will become easy for him.

Rather than repeating the word of testimony (la ilaha illa Allah), he will begin to live and experience it.

Praying five times a day will no longer be a chore… We wash our hands and faces once we wake up anyway – if we just wash our feet as well our ablution is complete… Add two minutes for prayer and we’re done.

And at noon, can we not set aside four minutes for four rakats of prayer? When we are fully immersed in the full materialism of the world around us, what is four minutes to take us back to our essence?

And in the afternoon? Can we not free up four more minutes for the required four rakat to open that window that reaches out to our actual dimension?

When we come home in the evening, three minutes for three rakats of prayer and we leave all our worldly worries behind, the peace of mind that accompanies the eternal.

And last but not least, before going to bed, a final four minutes for four rakat, with the clarity of having left all of our daily troubles behind. So, there it is, that’s all that is required of us, clear and simple. If we add it all together seventeen minutes a day! Seventeen minutes out of a day made up of fourteen hundred and forty minutes – that’s all!

But if you want to do more, if you have fully comprehended that there is an eternal life awaiting you, and you want to do all that you can, you are free to increase your efforts at will.

Pilgrimage is the next pillar of Islam after salat.

I’ve explained the importance of pilgrimage (hajj) in detail in the Mystery of Man.

The Rasul of Allah (saw) says:

“Hasten to perform pilgrimage (hajj) for one does not know what obstacle he may face in the future!”[5]

Hazrat Abi Umama (ra) reports that Rasulullah (saw) said: “Whoever fails to perform hajj while not being prevented from it by a definite and valid necessity, or by oppression from an unjust ruler, or by severe illness, and then passes away, in such a state has the choice to die as a Jew, if he so wishes, or as Christian if he so wishes.”[6]

This is why hajj is a mandatory worship that must be performed in all urgency.

When one completes his pilgrimage, all past mistakes are purged, including transgression of others’ rights. One becomes as pure as a newborn. The Rasul of Allah (saw) says to doubt whether your sins have been forgiven after your pilgrimage is the biggest sin of all.

Is it not absurd to miss such an opportunity? Especially when the time of death is unknown, is it not rational to become cleansed and purified from all negative energies and to not pass on to the life after death with such burdens?

As to the spiritual component of pilgrimage, even if for a very short time, you wear a shroud to symbolize being stripped of all worldly and material values and dive into the infinite values of higher matter.[7] To become stripped of the identity and swim without an ego in the ocean of infinite consciousness. To see the face of Allah at the Kaba and converse with the beloved…!

As for fasting and giving alms…

Fasting is a special requisite to enable the experience of one’s angelic state. It is a profound blessing. It is to allow you to recognize that you are essentially a being independent of food, drink, sex, ill thoughts and ill speech. Only 29 days in 365 days! It is to help you realize that you are not your body, but a being of consciousness consisting of angelic properties.

Paying alms (zakat), on the other hand, is based on the understanding that it is He who is present in every iota of existence, and thus to share with them at least one-fortieth of your wealth…

Here is the simplest explanation of Islam taught in the Quran by the Rasul of Allah (saw) who says, “Ease and facilitate do not harden, cause to love not hate”…[8]

Having outlined what the Quran requests of us, as taught by the Rasul (saw) let us now have a look at the concept of sin and what repentance means.

The sin of the ego has enclosed you like mountains

You seek the forgiver while unaware of your sins

[7] Refer to the chapter ‘Higher Matter’ in the Observing One.