How can the system be read?

With the power and consciousness of your Rabb comprising your essence; that is, by evaluating the dimension perceived by the five senses with insight, foresight and introspection. With the revelation by the angel who reads the Preserved Tablet (lawh al-mahfuz).

As I tried to explain previously, terms such as ‘religion’, ‘Quran’ and ‘Gabriel’ have not descended from a god in a specific location in space somewhere… As the concept of dimensions was not known to the people in past centuries, it has been narrated as though things took place in the heavens… 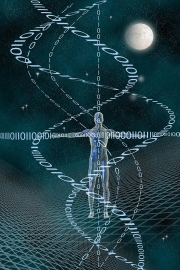 As can be seen, such experiences are not confined to specific locations in space or on earth, but are altogether relative and thus in higher or lower dimensions according to our perception.

Things that are perceived and seen outside the scope of what everyone else perceives and sees are visions pertaining to other dimensions.[1]

The primary and biggest reason why religion isn’t duly appraised today is because of the language barrier or the inability to understand the terms and concepts that are employed.

But if we realize that religion is disclosed from a dimension not a location, we can stop looking for god in space and understand the reality of Allah, angels, jinn, the life of this world and beyond.

This is why we must understand the concept of dimensions well before we move on to the topics of lawh al-mahfuz, Gabriel and what’s been read.

[1] Refer to The Observing One chapter ‘Higher matter’ for more information.