We have been addressed as ‘humans’…

What exactly is a human though? To what does the word ‘human’ actually refer?

Briefly, however, I would like to share what I believe salat is, why it has been offered to man, and why it is compulsory…

So, what distinguishes us from a robot? Do we know our difference?

Man’s quality of distinction is his ability to contemplate on what he recites, to comprehend and experience its meaning and to continue its application after salat!

“So woe to those who pray (due to tradition), who are heedless (cocooned) of (the experience of the meaning of) their salat (which is an ascension [miraj] to their innermost essential reality; their Rabb)”[1]

So what is the experiential reality of salat? 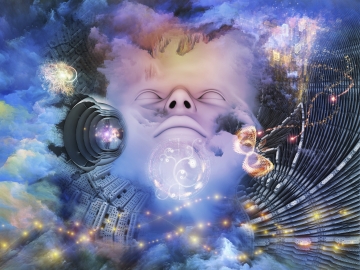 Muhammad (saw) came to teach us about faith in the One denoted by the name Allah, to witness this faith, and to have faith in the Rasul who has come to disclose this truth!

If you have understood Muhammad’s (saw) message then you would have realized that neither salat nor any form of prayer has been advised as offerings to a deity God somewhere in the heavens. For, there is no such God in the heavens! And no such God will descend to the earth in the future either!

So, if no form of prayer is done for a God ‘out there’, then why pray at all?

What is the presence of Allah? What does it mean to be in Allah’s presence?

What are we to gain from engaging in such practices?

All enlightened Sufis and saints (waliyy), past and present, unanimously agree that the act of turning to the One denoted by the name Allah pertains to one’s essence and the conscious self, or the conscience!

The conscience is the call of the Reality from one’s essence!

The hadith, “There are as many ways to Allah as the number of selves in existence” signifies that the way to attain the reality is not from the outside but from each person’s own essence!

Prayer or salat is no other than an act of turning towards the One denoted by the name Allah!

Prayer is the activation of the structural qualities pertaining to Allah in order to achieve one’s wish!

Salat, for common man, entails the realization and the experience of the various compositional qualities of Allah, such that it can be applied throughout one’s daily life even after performing salat.

I shared my thoughts on what I believe salat signifies on higher levels in The Essential Principals of Islam.

The first thing we recite when we stand for salat is “Subhanaka”, as a reminder of the magnificence and the infiniteness of the One denoted by the name Allah, and the insignificance of our world in respect of this grandeur! Evidently, it is imperative to know what these recitations mean in order to contemplate them and discern the importance and seriousness of their meanings.

Next, we read the “Audhu…” to seek protection, with ‘B’illahi, from the illusion of thinking we are this physical body and thus becoming blinded to many truths.

The word ‘hamd’ in al-Fatiha is used to denote ‘evaluation.’ So “hamd belongs to Allah” actually means “evaluation and appraisal belongs to Allah.” Indeed, the ability to duly appraise creation of the One denoted by the name Allah belongs only to Him! It is impossible for creation to do this! Thus, at the very beginning, man is informed of his capacity and cautioned to live within the System without transgressing his boundary!

The word Rahman is a proper noun, and therefore, cannot be translated![3]

“Albeit ‘Rahman’ can inadequately be interpreted as ‘the most compassionate’ it cannot be translated as such. The mercy and compassion pertaining to Allah is not a sensation of the heart or an emotion of kindness resulting from an inclination felt within the self. As delineated in al-Fatiha, it is a divine will and an infinite blessing.”[4]

Life is the essence of every good and blessing. Rahman creates us by bringing us into existence with our bodies and spirits, from nothingness, with divine will. Furthermore, He possesses an all-embracing grace with which He provides all of the bounties we need to sustain our lives and enable our continuation.

Based on this, Rahman, is far beyond the classical concepts devised by humanly evaluations, such as protector and forgiver! Universally, it means the One who brings into existence from nothingness, the One who manifests as He wills!

Rahim is the creator of the mechanism through which this is systematically achieved! The word Rahim is an Arabic word by origin, which literally means womb. Hence, just like how the mother’s womb uniquely nourishes and develops the baby to a worldly level of maturity, Rahim renders possible the manifestation of Rahman’s will, with the names and qualities of the One denoted by the name Allah.

This is the universal meaning of these names. It should not be confused with the perceptions based on worldly and humanly values.

Especially if we keep in mind that at any given moment one creature is attacking and slaughtering another one, an all merciful God watching over His creation from the heavens seems awfully incongruent with reality!

What must man, who has been created as the result of the intrinsic qualities denoted by the names Rahman and Rahim, remember and experience at least five times a day through salat?

Man, who has been created with the qualities denoted by Allah’s Names, whose essential reality is comprised of these very attributes, must remember that he is not the body to deteriorate away after death, but that he is a conscious being who will live forever as the requisites and the consequences of the potentials within his essence. And the body he will use after his life on earth is called the ‘spirit’.

It is the necessity of Rahim that man comprehends his reality; discovers the potentials deriving from the Names of Allah within his own essence, and experiences them to gain certainty and attain the station of ‘closeness’.

As a result of this, he lives the manifestation of the Maleekiyyah and Malikiyyah[5] in the ‘now’ and the forever, governed by the decrees of religion – sunnatullah (yawm ad-Din)!

In order to experience this, one must receive guidance from within their own essence.

This is why we say ‘guide us’ in al-Fatiha!

Then we recite some additional verses from the Quran, and contemplate on their meanings…

I hope this has answered the question “What is salat?” to some extent, even if it is only at a surface level.[6]

I refrain from expanding further as I do not believe the time and place is appropriate. I advise those who want a deeper understanding of salat to practice contemplation on what these meanings yield…

Doubtlessly, this topic is exceedingly deep and what I have shared here barely touches the tip of the iceberg.

I believe it is a good idea to reconsider the meaning of the words of Allah’s Rasul: “The deeds between two salats will be forgiven” and try to discern why this may be so...

Again, let us remember the verse:

“So woe to those who pray (due to tradition), who are heedless (cocooned) of (the experience of the meaning of) their salat (which is an ascension [miraj] to their innermost essential reality; their Rabb)”.

[2] Please refer to my book Muhammad’s Allah, for a detailed explanation of the Basmalah.

[3] Elmalili Hamdi Yazir, The Interpretation of the Quran, Volume 1, p32

[4] Elmalili Hamdi Yazir, The Interpretation of the Quran, Volume 1, p33

[5] Maleek: The Sovereign One, who manifests His Names as He wishes and governs them in the world of acts as He pleases. The one who has providence over all things. Malik: The Absolute Owner

[6] For more information please refer to the ‘Salat’ section in The Essential Principals of Islam.