One day a farmer found a note wrapped in plastic as he was ploughing his field that read: “Read this to find treasure!”

But the writing that followed was in a foreign language so the farmer took it to the Imam of his village, who according to the farmer was a great man, perhaps even the saint of their time!

The Imam had completed the Quran courses and was familiar with the Arabic alphabet, so he read the note and said: “It says ‘Read this to find treasure’ and there is a prayer here in Arabic! We must make as many copies of this prayer and give it out to everyone in the village at once!”

So, with his holy hands, the Imam rewrote the prayer over and over again and gave a copy to each household in the village!

Now everyone was reciting the 15 line prayer the Imam had written in their alphabet.

After some time, the Imam announced: “My dear villagers, it seems reciting this prayer once a day is not doing us any good, let us start reciting it once in the morning and once again at night… Surely, there must be some miracle to this!”

Naturally, some began to complain: “This isn’t working…” “There is no treasure!” 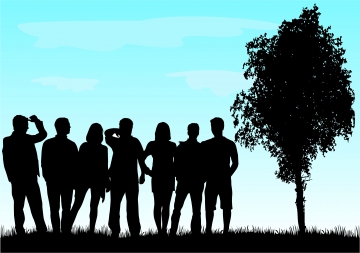 While others eagerly persevered… Months went by, but no treasure was found… Then one day, a traveler stopped by their village. After the evening prayer at the mosque, he realized the congregation was reciting a prayer he had never heard before. He approached the Imam as he was leaving the mosque and asked him for a copy of the prayer.

At night, after everyone had gone home, the man lit up a candle in the guesthouse in which he was staying and started to read (!) the Arabic prayer (!) on the paper the Imam had given him.

With the candle in one hand and the paper in the other, he walked out of the guesthouse, and went to the enormous sycamore tree in the center of the village. Reading on, he walked towards the stream near the north exit of the village, then again he read the Arabic prayer (!), and went near the willow tree drooping over the streambed. Following the instructions of the prayer (!) he turned his face towards the village, took 21 steps, and began to dig beneath the stone he found there…

Soon after he found a wooden box full of gold coins! He took the box of gold and continued his journey…

The ‘prayer’ the villagers had been reciting for months was an authentic treasure guide! The only problem was that the villagers had been merely repeating it with no conscious understanding of it! The traveller, on the other hand, READ it, understood it and applied it, and found the treasure! While the villagers continued reading the prayer the Imam had written for them in their alphabet without having any idea about what they were actually reading!

They read for the sake of reading…

Or they try to read, or they can’t read…

In The Power of Prayer , I talked about how “even if one does not know the meaning of a particular prayer or dhikr they recite, it will still benefit them.” For, this pertains to the functioning of this mechanism and its result has nothing to do with belief or a deity in the heavens!

But, how to actually READ?

Those who believe in Muhammad (saw) will believe in and understand the One whose name is Allah, based on the information provided in chapter al-Ikhlas.

Based on everything I shared in previous chapters, it is evident that the essence of man comprises the dimension of Rububiyyah and his own Rabb, whose existence is derived from the Names of Allah! This ‘dimension’ is not an external spatial dimension but within the very structure connecting his essence to his consciousness! Since this applies to all beings, we say the Rabb of the Worlds!

In accordance with the holographic reality, every unit of existence present in the knowledge of the POINT comprising the multiple universes, the Arsh (the Throne), the Kursi (the Footstool), and all of the heavens and their inhabitants are contained!

Man, who has been created from nothingness, is essentially still inexistent, as only the One called ‘Allah’ that Muhammad (saw) spoke of exists! This is why the declaration “La ilaha – there is no God or godhood” was made!

As such, man is advised to resort to his own reality, that is, to the dimensional qualities pertaining to the Rububiyyah[1], Malikiyyah[2] and Ilahiyyah[3] attributes of Allah within his own essence!

“…And He is with you (the origin of your being) wherever you are (as your reality exists with His Names)… (This points to the unity of existence beyond the illusion of duality).” (Quran 57:4)

“And if you speak your thoughts (or conceal them,) know that indeed He knows the secret (in your consciousness) and what is even deeper (the actual Names that compose it).” (Quran 20:7)

This is because you are not praying to something outside and beyond you!

The Malik in al-Fatiha also points to this:

“READ the knowledge (book) of your life! Sufficient is your self (your consciousness) against you at this stage as an accountant (witness the results of your thoughts and actions during your worldly life lest you judge others).” (Quran 17:14)

In line with the holographic reality, the Name ‘Hasib’ is present within us at the dimension of Rububiyyah. Thus, the act of giving account is not to a God beyond! We give account to the Malikiyyah of the One named Allah in our essence on the ‘yawm ad-Din” the ‘now’ and the forever governed by the decrees of religion – sunnatullah. As opposed to some distant day, centuries away!

This is why, before the Quran is recited the ahlul hal (the ones who experience the reality) say “B-ismi-ALLAH ar-Rahman ar-Rahim” to mean “at every instance, my reality becomes manifest with the Rahman and Rahim qualities of Allah”!

Thus, salat is the experience of this reality!

The Ayat al-Qursi also emphasizes the various levels and qualities of the One whose name is ‘Allah’, present in man’s essence, urging man to remember and evaluate them! In contrast to man’s sleepy nature, it calls to attention the aspect within his essence that never sleeps.

While the verses that begin with “Say” invite us to read them, they actually encourage the READer to experience their meaning.

That is, these verses do not imply that we turn to a heavenly God to seek His help, but rather, that we duly serve the One whose name is ‘Allah’ by deservedly discerning the dimensions within our essence comprising our very existence and reality.

Of course, this is my understanding and does not bind anyone…

Whereas the following verse clearly explicates the invalidity of godhood after believing in the One whose name is Allah:

“Do not turn to (assume the existence of) a god (exterior manifestations of power or your illusory self) besides Allah. For there is no God. Only HU! Everything (in respect of its thingness) is inexistent, only the face of HU (only that which pertains to the Absolute Reality) exists!” (Quran 28: 88)

Some did not annihilate their existence; they merely realized their inexistence in respect of Allah…

And some created a ‘god’ to exalt ‘themselves’ (identities) and become the ‘glorified’ ones of this world and the hereafter!

Indeed, those who accepted the religion of Islam by realizing their ‘inexistence’ and accepting the reality that only the One whose name is Allah exists, have read the treasure map brought by Muhammad (saw) and followed its instructions. They have read the Quran and deciphered the secrets it signifies; they have READ the One whose name is Allah and the worlds He created with His names and the system and order in which they live, and as a result, they found the infinite magnificent treasure within their essence!

While others squandered away their lives with gossip and hearsay…

As Yunus would say: “Another one from the herd passed over…”

[1] The qualities of the Names comprising one’s essence

[2] The quality of the Sovereign One, who manifests His Names as he wishes and governs them in the world of acts as He pleases. The one who has providence over all things.