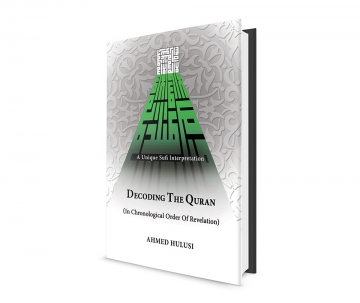 The zenith of sainthood, Hadhrat Ali (ra), who claimed, “I am the articulation of the Quran” is narrated to have said:

In another narration, Hadhrat Ali (ra) says, “Ask me from the Book of Allah! There is not a single verse in the Quran about which I don’t know whether it was revealed during the day or the night, on land or in the mountains.” (Hadhrat Ali [ra] was like Rasulllah’s (saw) Book of Revelation. Hence it is only natural that he would be the most qualified at knowing the chronological order of the Quran)!

M. Ibn Shirin, the great saint of Tabi’un, underlined the significance of the importance of this arrangement with his words, “If the BOOK [Quran] arranged by Hadhrat Ali [ra] (i.e. by order of revelation) was found, REAL knowledge would be found!”[1]

Since we do not have Hadhrat Ali’s arrangement of the Quran we prepared this chronological order by taking as reference (with some exceptions) the arrangement by Abdullah Ibn Abbas [ra] who was known amongst the companions as the second expert of the Kitabullah (Book of Allah) after Hadhrat Ali.

Whether by order of revelation or the standard format, the important thing is to read the verses by the transversal method. That is, by taking into consideration all verses that are related or allude to the same concept, as there is no definite order of revelation for all chapters and verses that we know with absolutely certainty.

Surely we seek refuge in Allah from the accursed and rejected (rajim) Satan with the spectacles (insight) of the Basmalah and chapter Al-Ikhlas.

By the one who is denoted by the name Allah (who created my being with His Names in accord with the meaning of the letter ‘B’), the Ahad (One - Allah is the infinite, limitless and indivisible, non-dual ONENESS), the Samad (Absolute Self-Sufficient One beyond any need or defect, free from the concept of multiplicity, and far from conceptualization and limitation) who begets not (no other form of existence has ever originated from Him, thus, there is no other) nor is begotten (there is no other god or form of existence from which He could have originated) the Rahman, the Rahim.

Indeed, the Quran was revealed to man (vicegerent), as a function of dhikr, to remind him of his essential reality!